The Office of the Prime Minister provided EkoSkola with giant size ‘snakes and ladders’ canvas games.  Instead of the usual ladder there is an energy saving bulb whilst the snake has been replaced by a bolt of lightning indicating an electric shock (for those who are not energy and water conscious!).  It has also hints how to use up less electricity and water…

The game is a made up of two pieces of  canvas 4 metres by 8 metres.  As already indicated it is played like a snakes and ladders game.  On each piece of canvas there is a game numbered from 1 to 50.

You will need two large dice (soft filled ones are the best).

Please note that pupils are required to take off their shoes in order to play on the game.

Rules may be changed according to the teacher’s lesson aims and time available.

Any EkoSkola school wishing to use this game should contact their EkoSkola Coordinator. 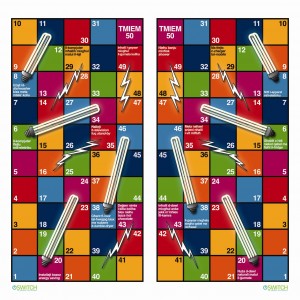 Download instructions how to play gameDownload picture of game