We care about our present and our future 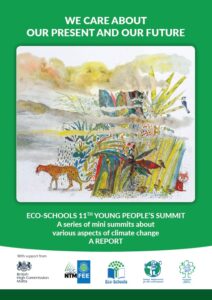 We care about our present and our future: A report. Eco-
Schools 11th Young People’s Summit…

Listening to children’s voices for sustainability

There was a time, in the not-so-distant past, that the notion of listening to and acting on children’s voices was unheard of and even frowned upon. Children were considered as incapable of making value judgements, of evaluating issues and propose solutions to problems unless they were told how to do it by adults. Most of the opportunities offering children a platform were mostly (at best) different forms of tokenism. Children were expected to listen to and uncritically absorb what adults had to say on issues and themes that had a direct relevance to the children’s present and future.

Education for Sustainable Development seeks to empower individuals irrespective of age to become active citizens seeking to promote sustainable lifestyles and choices. Nature Trust – FEE Malta sought to actively facilitate this by implementing the international Eco-Schools Programme (locally called EkoSkola). The EkoSkola programme is mainly driven by student initiated and managed actions that start off at school, but then spill over into their households and their community.

Since its inception in 2002, the EkoSkola program has worked hard to bring the voice of children to policy makers, both local and overseas. So, over the years EkoSkola has created different fora to achieve this, like: EkoSkola Parliament sessions, consultation meetings with various Maltese presidents and ministers; meetings with the main political party leaders during which they presented a memorandum prior to the General Elections; and countless meetings with mayors and councillors of different localities.

Another forum that promotes children’s voices is the annual Young People’s Summit, during which primary and secondary school students discuss various sustainability issues and propose ways how these issues can be addressed. These issues are collated into a declaration that is then presented to members of parliament. There were even cases where these recommendations were also presented to international fora such as during the Informal Meeting of the EU Environment Council; during international conferences about sustainability, and to delegates attending the CHOGM 2015.

As part of the COP 26 follow up, the British High Commission sponsored five mini sessions that explored Climate Change from various dimensions that were attended by students from 103 schools (63 primary and 40 secondary). During the online summits, students discussed with local experts the various perspectives of the issues explored and proposed practical actions that could be implemented to address the issues. These proposals were collated in this special publication together with several other inputs from younger children in the form of drawings and craft projects.

An interesting spin off from this series of mini summits, was an interest in learning what children from other countries are doing regarding climate change. Through the international Eco-Schools network, Nature Trust – FEE Malta brought together during an online meeting two schools from the UK and two from Malta to share their respective experiences of climate actions. The very positive vibes generated by this meeting have already resulted in the twinning of two schools and plans are already being discussed to organise similar meetings in the future. The participating UK schools were: Pennar Community Primary School from Wales and Ulidia Integrated College in Carrickfergus, Co Antrim from Northern Ireland.

Nature Trust – FEE Malta has over the years been a trail blazer in the field of children empowerment and has inspired other organizations by its mission and initiatives to give children space.  Nature Trust – FEE Malta remains committed towards continuing to provide opportunities for children because it (like them) believes that they have every right to be involved in shaping the decisions that will affect their quality of life!